Researchers from NUS are harnessing the power of supercomputing to understand the mechanism of noise generated by jet engines to reduce the impact of noise emission on the environment and human health. 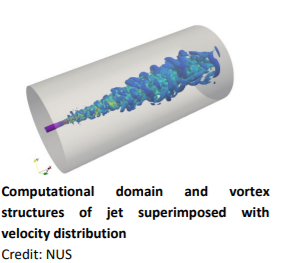 The noise generated by modern aircraft has been a long-standing noisepollution problem since the first commercial jet-engine-powered aircraft entered in the early 1950’s. The elevated acoustic noise levels from aviation in flight has serious adverse impact on the health and well-being of people who live or work near airports. These health problems include, but are not limited to, hearing impairment, sleep disturbance, increased stress levels and the increased risk of hypertension and heart disease, which affect all age groups, especially children.

A typical turbofan civilian aircraft during take-off can generate an overall sound pressure level (OASPL) of approximately 100 dB, measured about 100ft away from the runway centre line. Much of the noise emission from jet-engine-powered aircraft originate from the airframe and engines. The noise produced from jet exhaust is by far the major source of noise pollution especially for low bypass ratio engines.

To reduce its impact on the environment and health, it is essential to understand the mechanism of noise generation, which can be challenging due to the complex physics of turbulent flow and its interaction with the acoustic field. A team of researchers at NUS’ Temasek Laboratories are utilising NSCC’s supercomputing resources in an attempt to employ the computational aeroacoustics (CAA) method with high-fidelity numerical simulations to accurately resolve the jet flow and predict its noise emissions. The research hopes to improve the understanding of the underlying physical process of noise generation and radiation. 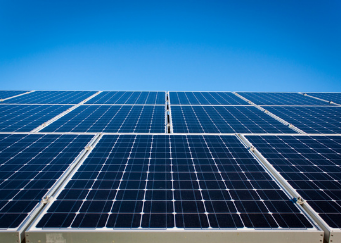 Automating the detection of defects in recycled solar cells

Researchers at NTU are using HPC to automate and more accurately detect visual defects in solar panels in a bid to reduce the workload required for manual inspections. Amid the... 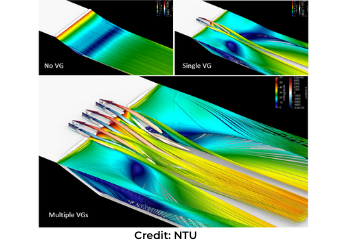 Researchers at NTU are tapping HPC resources to investigate methods to improve turbine blade aerodynamics that could lead to energy and fuel savings. Flow separation is a common... 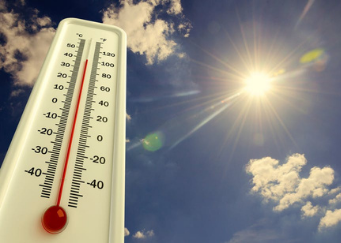 A research team from NUS is tapping on NSCC’s supercomputing resources to develop an urban microclimate model for the local Singapore environment at the NUS Kent Ridge campus...